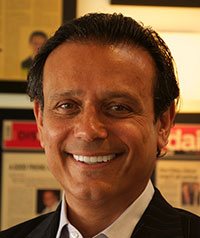 For almost four decades, New Films International (NFI) has been building its reputation as a reliable full-service production company and trusted sales partner. The company is engaged in the production, acquisition and worldwide licensing of theatrical feature films and TV series, and touts a catalog that features hundreds of titles across a variety of genres. Finding new opportunities with digital distribution, NFI has pioneered a unique partner program whereby it makes its catalog of films available on VOD platforms throughout the world. Nesim Hason, New Films’ founder and CEO, shares with World Screen Weekly some of the company’s latest endeavors.

WS: What has been driving New Films International’s business?
HASON: Distribution has been our bread and butter for the last 38 years and still continues to be a major focus for us. However, production is steadily becoming our main priority. To date, we’ve produced over 40 films and currently have 40 more projects at different stages of development. Keep in mind that NFI is not only a production and distribution company, we also operate in theatrical operations, financing, and servicing—all on our own without outsourcing. Production-wise, our biggest driver right now is our international co-production Torque.

We’ve partnered with major European companies to make this TV series happen. Once it finishes production, it will be the first of its kind and will blow traditional production models out of the water.

WS: How much of the catalog is films versus series; are you looking to shift that balance in either direction?
HASON: Our catalog is still dominated by films. The popularity of series is definitely something we have taken note of, though. As far as production goes, our series projects are gaining more traction and attention compared to films. However, there is still a high demand for certain genres of film, which with a large catalog like ours, we can easily provide.

WS: With so much high-quality scripted in the market, how is New Films working to attract top-level taken to its projects?
HASON: We’ve been fortunate over the years to build a strong repertoire with many companies, agencies and even unions. Our reputation and our ability to sell is what many find most impressive. Not to mention that our projects themselves offer lucrative models the industry has never seen before, causing many to want to be a part of them.

WS: Are output deals still a key piece of your business?
HASON: Absolutely. We are very fortunate to be partnered with Lionsgate in Latin America, where we have one of our largest output deals. For the U.S., we also have a very special relationship with Amazon, wherein we are able upload and set our own terms for all of our programs on the platform. Aside from that, we have established output deals with all of the major U.S. cable companies, including DirecTV, InDemand, Vubiquity and more. Our output deals never cease to deliver for us.

WS: How is New Films working with digital platforms?
HASON: Our role with digital platforms at the moment is that of a content provider. We work with all of the major cable and digital [platforms] in the U.S. and seek to do more business with regional digital platforms all over the world. Since we have been in the business for so long, we have accumulated our products in multiple languages (both dubbed and subtitled), which is very attractive to local digital services. For the future, we hope to be able to partner with them on the production side so we can work together on content creation basis, too.

WS: What are some of the new highlights from the slate that you can share with us?

HASON: To accompany our slate of Academy Award winners and nominees, we’ve picked up some exciting films in all genres. We have In Vino, a dark thrilling comedy where a billionaire’s family gathering takes a fatal turn and quickly becomes a scheme for inheritance money. This hilarious and surprising story stars Golden Globe winner Ed Asner.

Another new title for us is a faith-based love story, A Lesson of Love. It’s a romantic film that tests how far one will go to be with their soulmate.
Next, we have Horrorshow, which is not your typical ghost story. We follow the afterlife of a murder victim and root for her to receive the justice she deserves.

Last but not least is Fortune Defies Death, a thriller that reveals the greed behind rogue family members that quickly becomes greater than the cost of their own lives. Watch as they lie, cheat, steal and betray each other to seize the family fortune.

Also, we are proud to announce that we are now representing Nova TV Bulgaria’s number one prime-time hit, Stolen Life, a 46×1-hour drama series. This six-season series has its first season available now for delivery for all international markets. Directed by Peter Valchanov, Stolen Life follows a fateful decision of swapping two newborn babies into different lives. By doing so, the doctor responsible changes the course of two families’ futures…but the truth must avail. After 33 years, this mystery is brought to the surface, as all the characters involved unknowingly end up under the same roof of the same hospital where their lives were changed forever.

WS: What will be New Films’ focus as it heads into MIPTV 2018?
HASON: Our focus for MIPTV this year is to continue to distribute our catalog and secure more deals with our newest titles.

As always, we have high-quality products with amazing casts, plus we can make attractive deals like no other company can. Also during the market, we are keen on solidifying partners for our international co-production projects. We have incredible, money-making co-production projects that are ideal for existing players who are looking for cost-effective models or for newcomers who want to dip their toes into it. We are ready to do it all.

Nesim Hason: “We Reduced Our Prices to Serve All Digital Platforms”

After humble beginnings in...